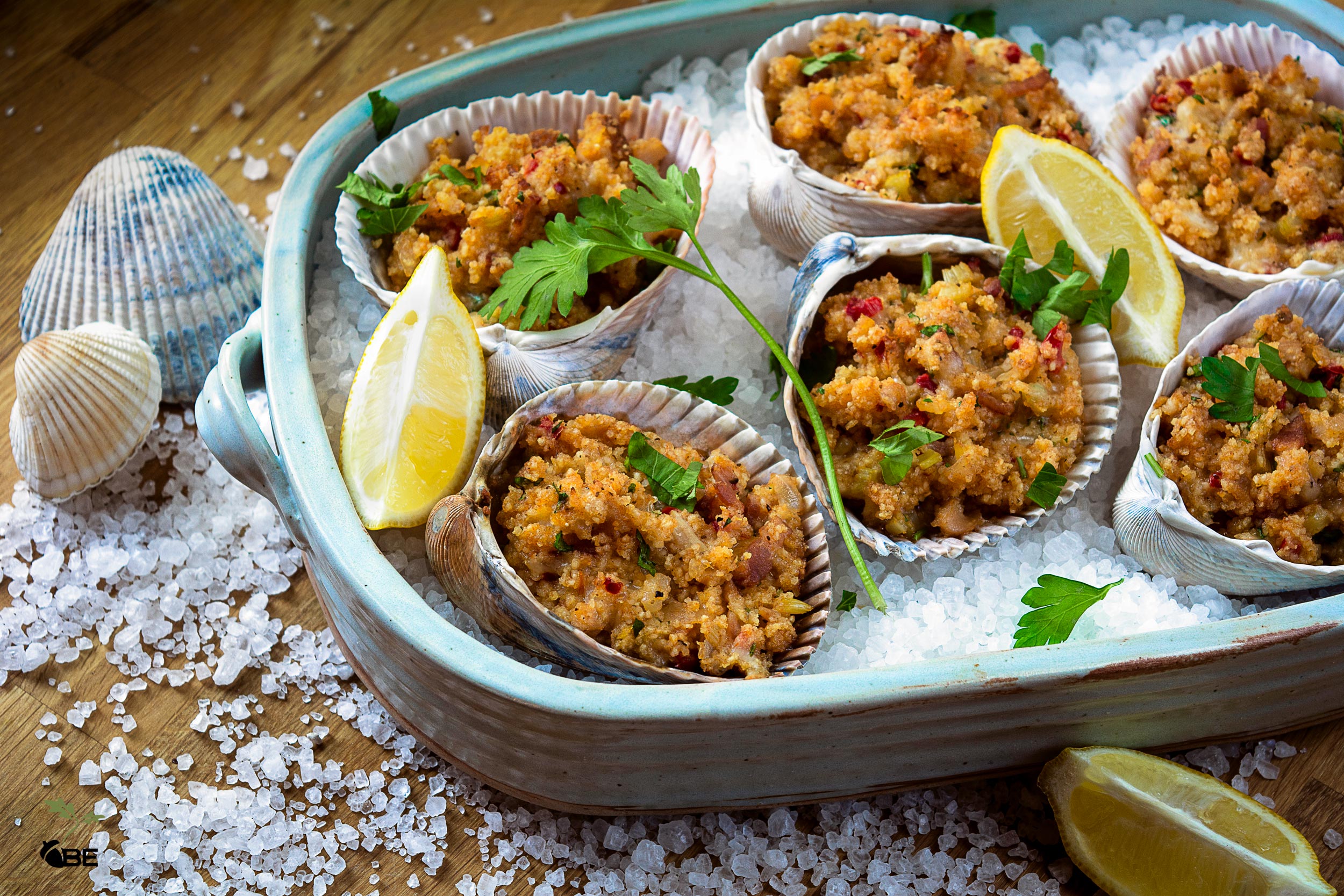 Like the famous stuffed quahog recipe originating in Cape Cod, Nantucket, and Martha’s Vineyard, Massachusetts, this Southern cornbread, bacon, and topneck rendition baked in hucked and cleaned half shells of hard-shell clams makes a delicious entree reminiscent of the many delicious seafood dishes one might discover along the United State’s Eastern Seaboard from Canada to Florida.

Over a decade ago, I tasted my first stuffed quahog, made from freshly caught hard-shell quahog clams, at Larsen’s Fish Market in the Menemsha fishing village on the Menemsha Basin in Chilmark, Martha’s Vineyard, Massachusetts. I meandered out to sit on a rock at the historical Dutcher Dock while Shannon began to wander down the sands of the Menemsha Bight (a north-shore outlet to the Vineyard Sound), taking photographs. By the time he returned, I had eaten the entire stuffing out of half shell, strolled up Basin Road to purchase another one at the fish market, and returned to eat it on my same rock. He asked if it was good, and I told him that we just needed to buy him one to taste (not telling him that I had already devoured two of them). For the third time, I entered the little market to grinning faces. The fishmongers knew exactly what I was about to purchase. And yes, I gave Shannon a bite or two.

For the Clam Stuffing:

For Assembling the Stuffed Clamshells: 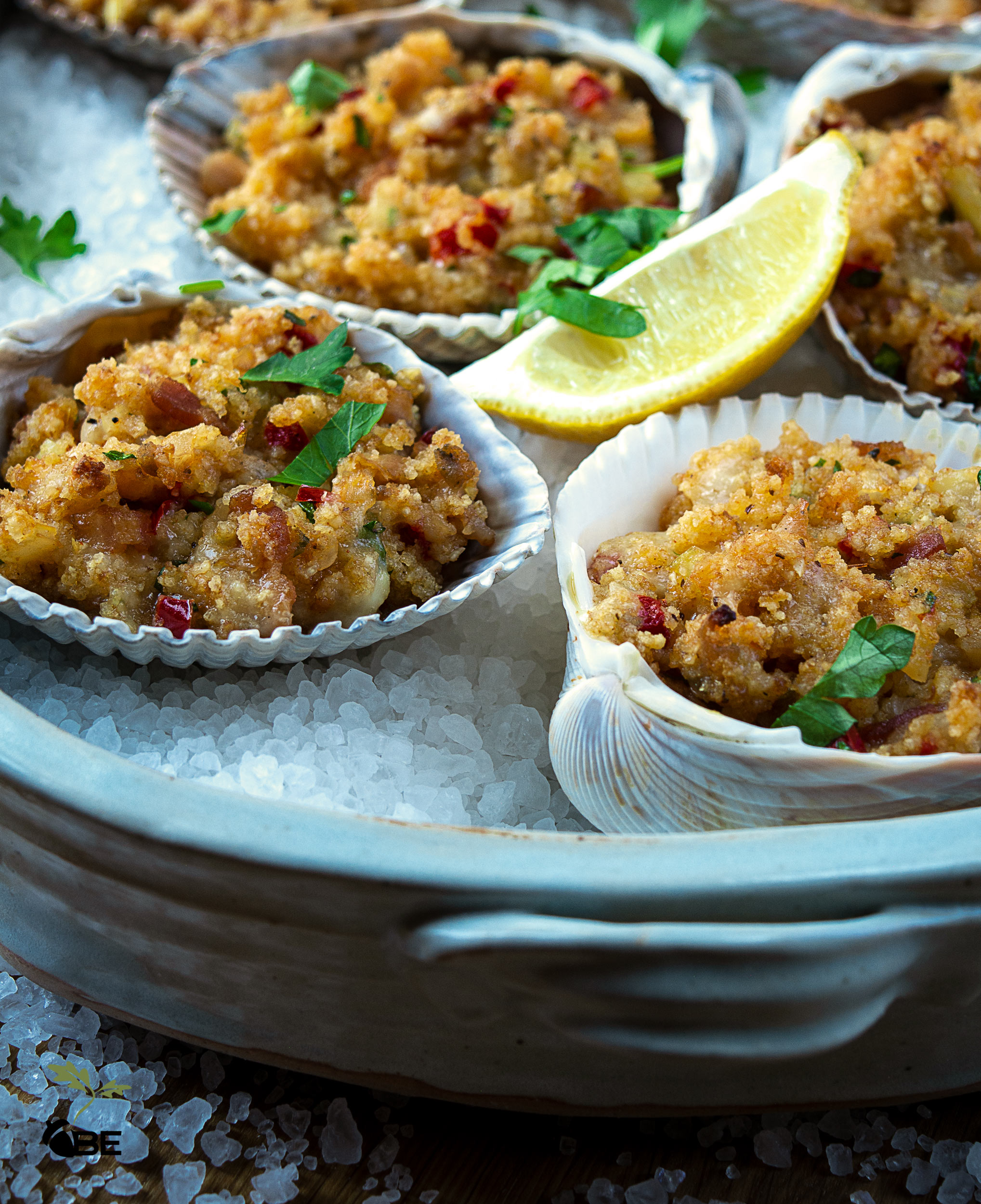 All the clams found in the intertidal mudflats, estuary sandbeds, and salt marsh of the inlets and rivers off of the Atlantic Ocean on the East Coast of Canada, the United States, and Mexico are known simply as hard-shell clams. The size of these rounded clams determines what they are called and how they are used in the culinary world. Aged chowders, which the New Englanders call quahogs (kō-hogs), have the largest shells and meaty interiors that mainly adorn chowders and soups. However, their giant shells and meaty interiors make delicious stuffed clams, also known as “stuffies.”  Delicate tiny buttons and small littlenecks, tender topnecks, and heartier cherrystones offer the perfect textures for eating shucked or unshucked clams either raw, steamed, grilled, or served on the half-shell. Dig and buy only clams where their lids snap tightly shut for protection when you reach for them, which determines that they are alive and fresh.

To Make the Cornbread:

Preheat the oven to 375°F. Coat an 8×8-inch baking pan with cooking spray. Set aside.

In a mixing bowl, whisk together the sugar, grits, flour, salt, baking powder, and baking soda. In a separate mixing bowl, blend the buttermilk and eggs until combined well. Incorporate the egg and milk mixture into the dry ingredients. Gently fold in the melted butter. Pour the mixture into the prepared baking pan. Bake for 25 minutes or until an inserted cake tester comes out clean. Set aside to cool completely.

Keep oven temperature at 375°F to bake the stuffed clamshells.

To Make the Clam Stuffing:

Heat the olive oil in a skillet set over medium heat. Render the bacon until lightly browned, approximately 4 minutes. Add in the diced onion, minced garlic, diced red bell pepper, diced celery, and Sambal Oelek to the skillet; sauté until onions, peppers, and celery soften, about 5 to 6 minutes. Season with salt, pepper, brown sugar, Old Bay Seasoning, butter, clam juice, and water. Remove from the heat. Stir in the minced clams and fresh lemon juice. Set aside to cool about 10 minutes.

In a bowl, crumble the cooled baked cornbread. Add the minced Italian Parsley and shredded pepper jack cheese. Toss ingredients together. Gently fold the clam mixture into the cornbread mixture in the bowl just until combined.

To Assemble the Stuffed Clamshells:

Generously spoon the clam stuffing into the 16 clean clamshell halves. Place them stuffing side up in a baking dish. If desired, fill the bottom of the baking pan with rock salt and place the shells stuffing side up in the salt to keep the shells from moving around in the dish. Bake in the already heated oven for 20 minutes, or until heated through. Do not overbake the stuffing, which will cause the tender clams to toughen and become rubbery. Serve the “stuffies” hot on the half-shell with lemon wedges to the side for squeezing fresh lemon juice over the tops.