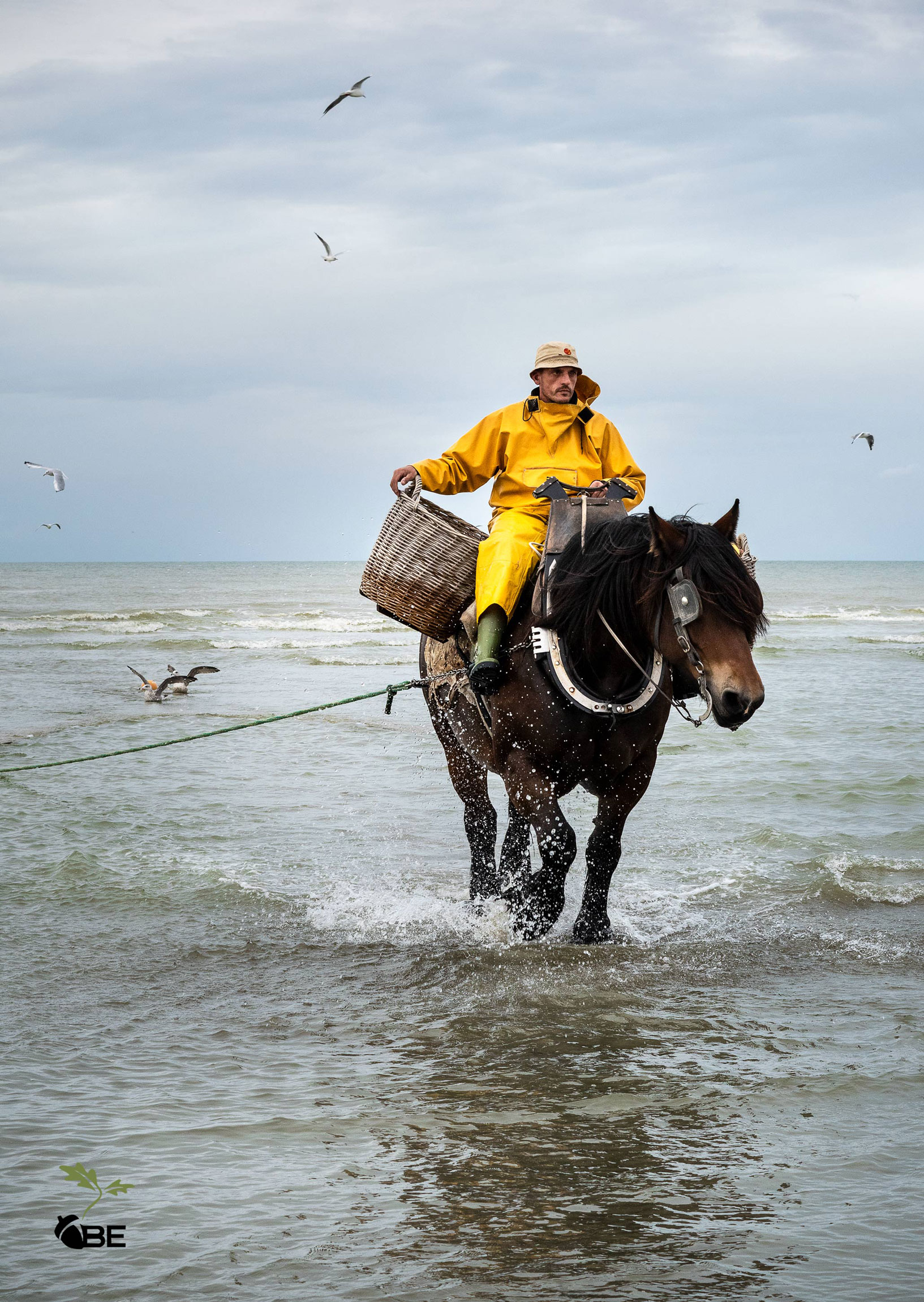 The teasing wind swirling off the water tousled my humidity-drenched curls into a frenzy as I stood on the gray shores of the North Sea in Oostduinkerk, Koksjide, Belgium. My husband, Shannon, paces ahead of me, continued to beachcomb the quiet shoreline, finding unique collections of delicate shells, blue-tinted jellyfish, and strands of seaweed carried up by the earlier tide. Arriving on the coastal tram about an hour before the lowest tide, we chose to wander the nearly people-empty sands, waiting for the horses.

To add a checkmark on my “dreams fulfilled” bucket list of places and things I wanted to experience in life, I had come an hour from Bruges by train to this historic coastline to see the traditional Belgian Brabant horses. 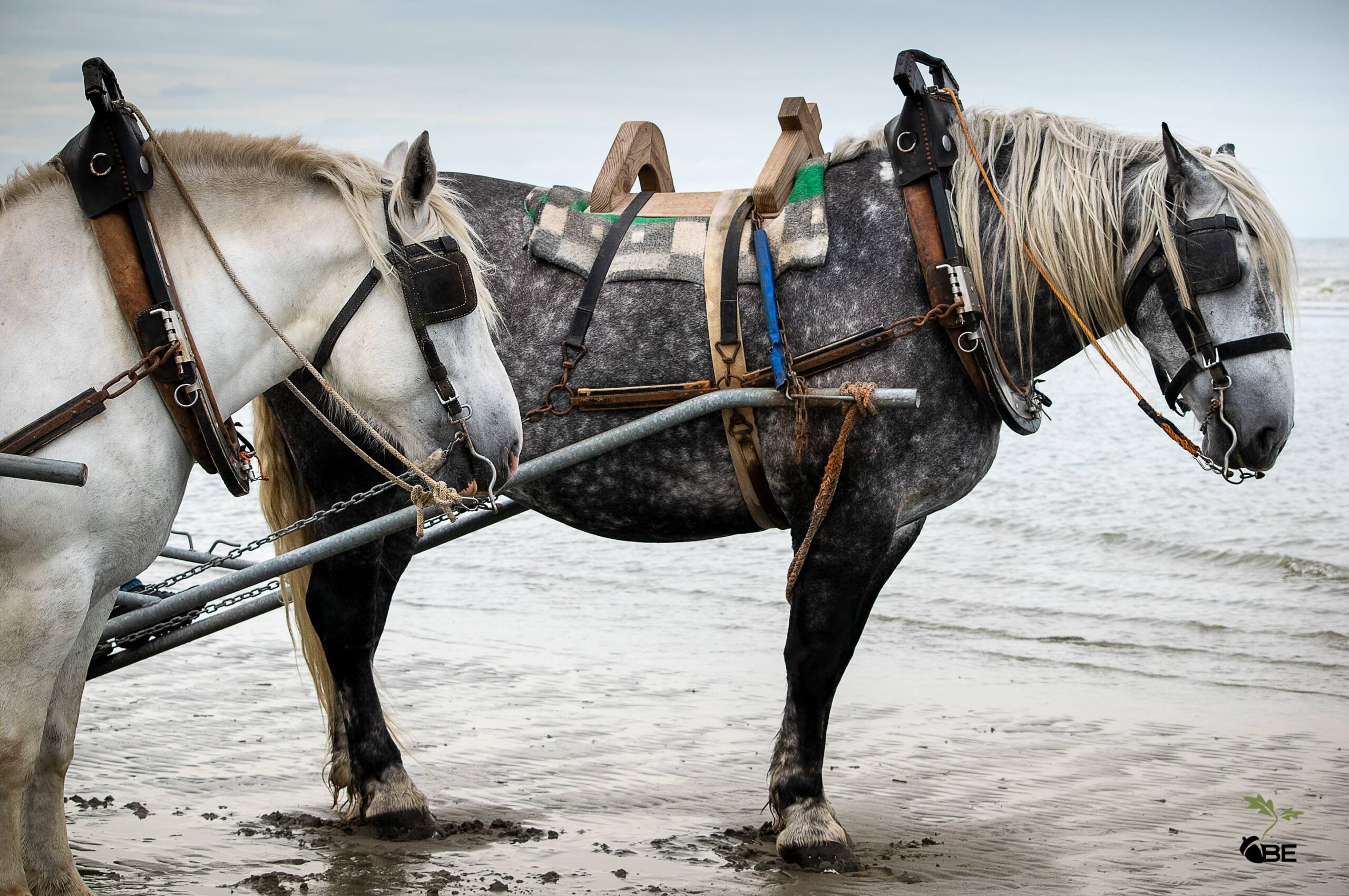 But why the jaunt to the little Flemish town of Oostduinkerk?

Traditionally, as far back as the 16th century, fishers of the North Sea coastal villages, stretching from the Netherlands to France, rode their horses out into the low-tide surf to catch the shrimp or other delicacies. Decades later, now placed on UNESCO’s endangered “Intangible Cultural Heritage of Humanity” list as of 2013, only about 15 paardenvissers (Flemish for “horse fishermen”), all from Oostduinkerk, Belgium, remain actively participating in this traditional shrimping method. 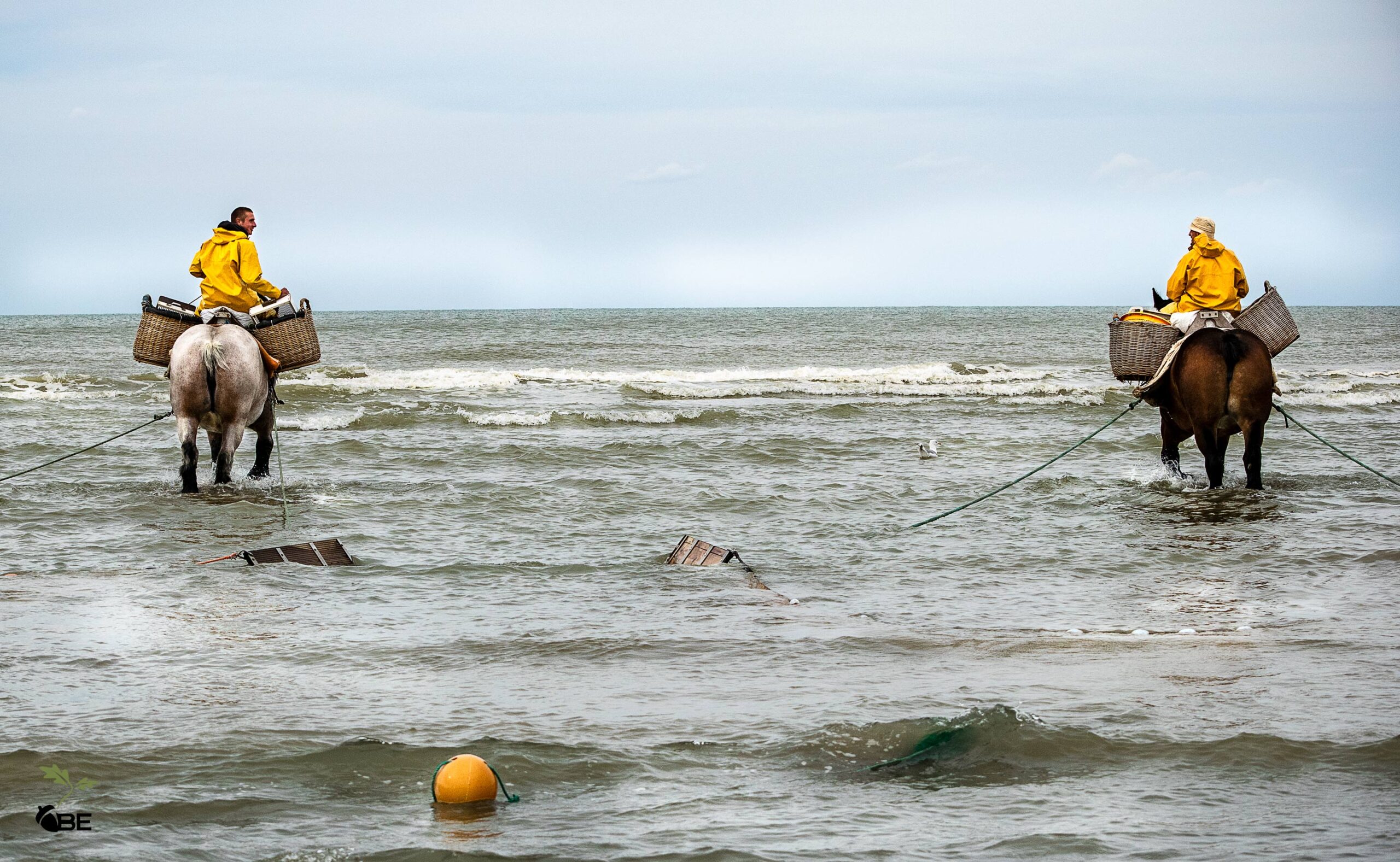 Annually from about April to October, or longer, if the weather holds, these shrimp fishers parade their beautiful steeds, pulling the carts with all the equipment, onto the Astridplein, or the main square of the village. After moving down to the edge of the water, each paardenvisser preps the horses for their tasks with the necessary gear and pulls on their own iconic yellow oilskin jackets and rubber knee-height fishing boots. With great care, the shrimpers guide their giant Brabant horse barrel-deep into the frigid surf. They sit mounted on the hand-built wooden saddle, with two large woven baskets attached on each side. Attaching the ends to the horse’s harness, the hand-knotted net stretches several feet out behind the horse’s feathered hair-covered hooves. The rhythmic pounding of their heavy gait and the thumping chain linked to the dragging net on the low-tide seafloor vibrate the shrimp into activity. Spanning the three hour interim of low tide, with respect to their animals and the relentless chill of the water, the pardenvissers return to the shore hourly to give the horses a rest and assess their catch to that point. 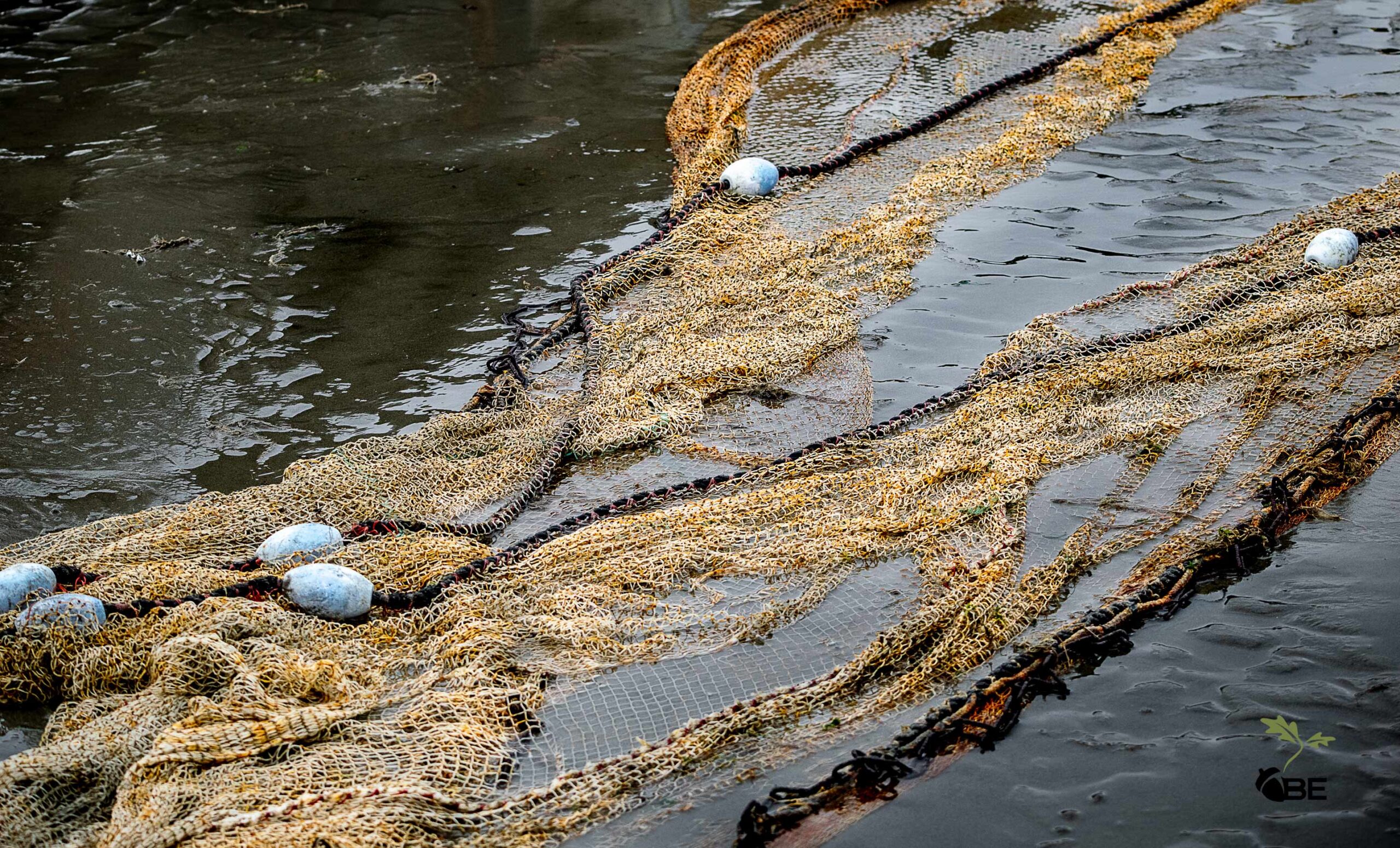 And so we came to Oostduinkerk to witness this spectacle (with a hundred other people). However, standing with the horses on the Astridplein, touching their soft muzzles, and feeling the warm breath from their nostrils as they nibbled at my sleeve, I felt as though I stood alone with these mighty horses. 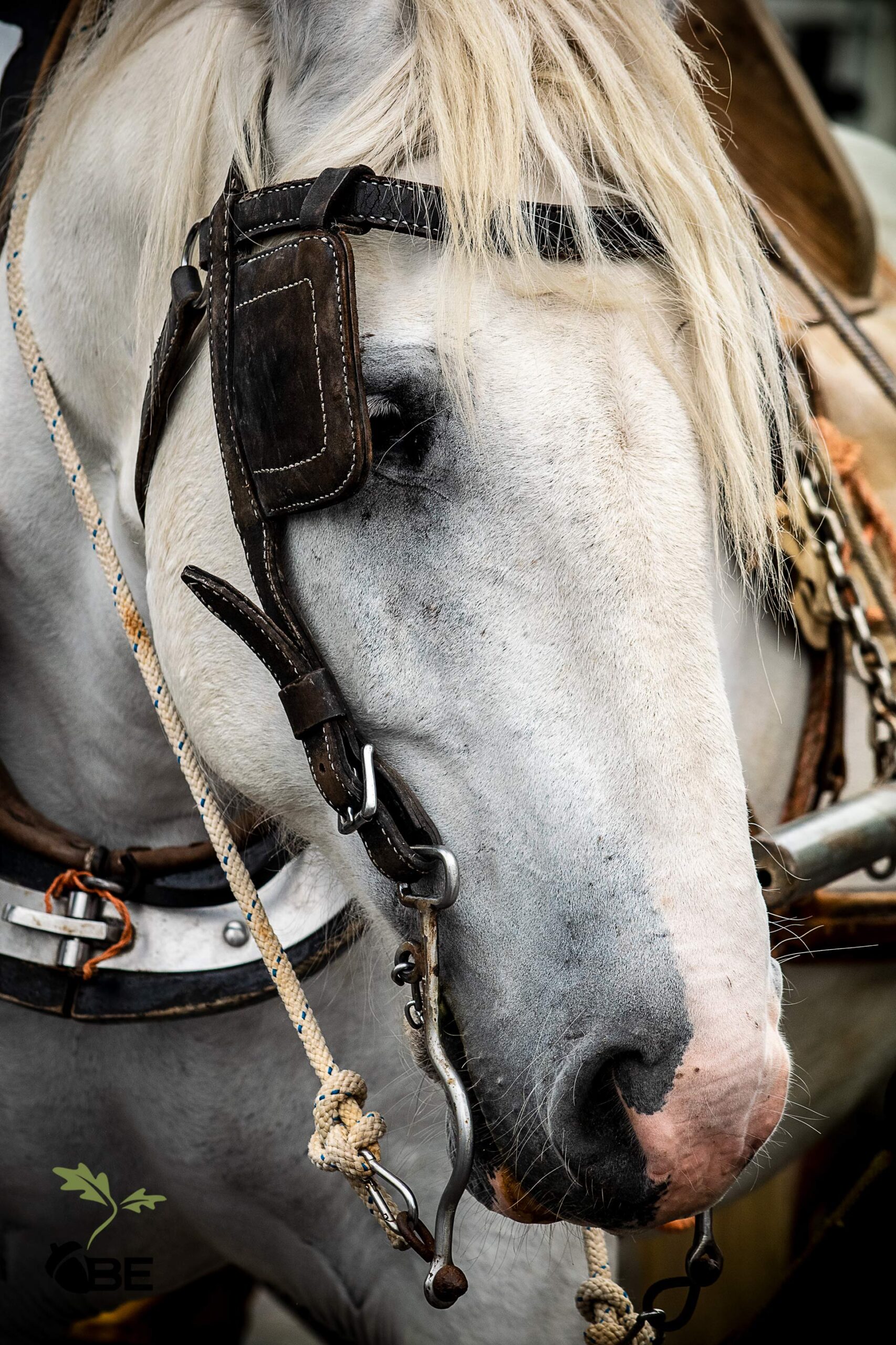 With direction from the leader, the fishers and their families resumed their positions on the sides of the cart. The horses pulled carts swiftly off the concrete and through the wet sand toward the water’s line. Delighted to watch the Brabants’ famous prancing trot up close, somewhere between the square and the water, I threw off my shoes and ran barefoot alongside the teams. 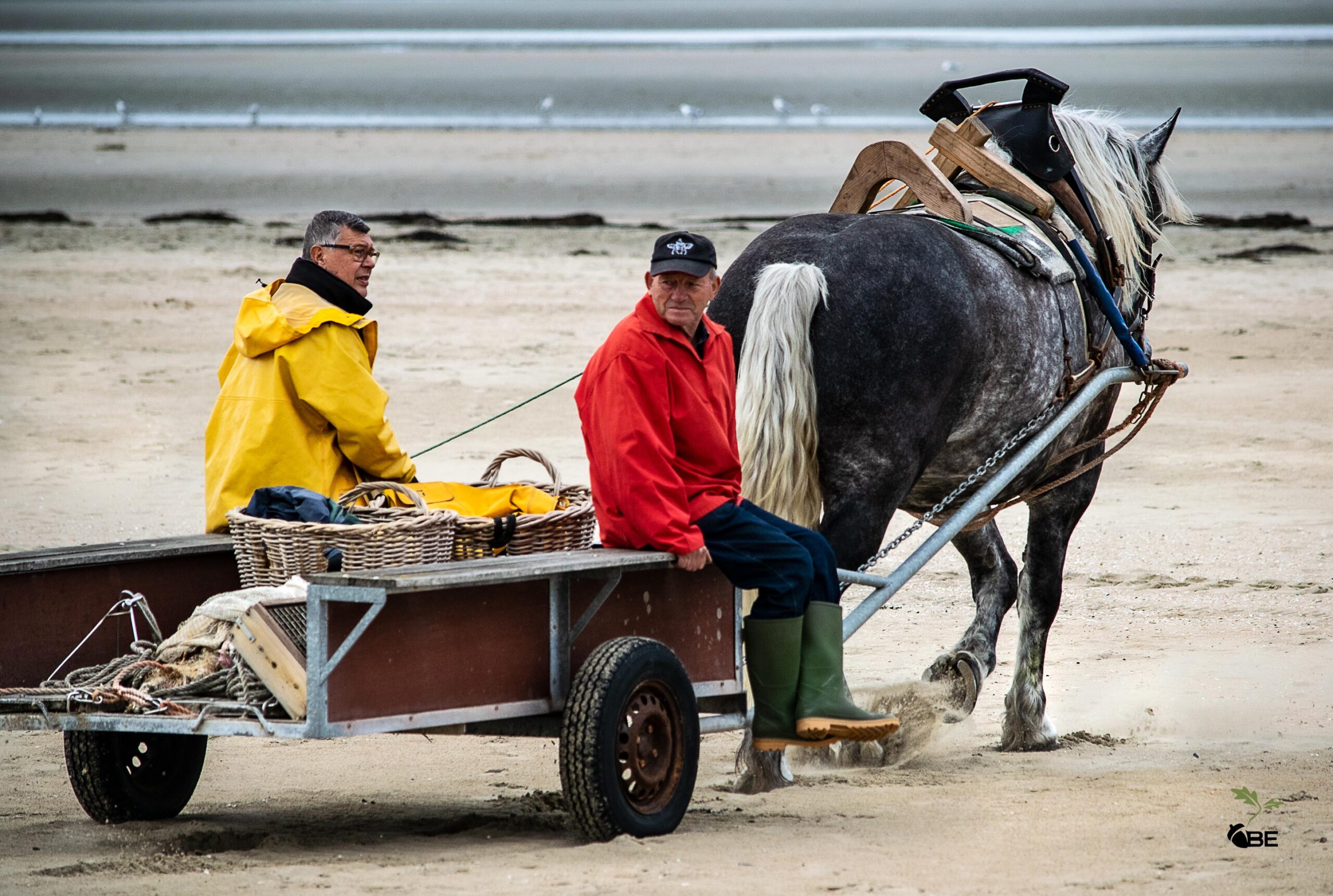 In minutes, the six men astride their mammoth horses spaced along the edge of the ocean moved forward. The coiled ropes and extended nets on the beach snaked after them, finally billowing like a parachute underwater. 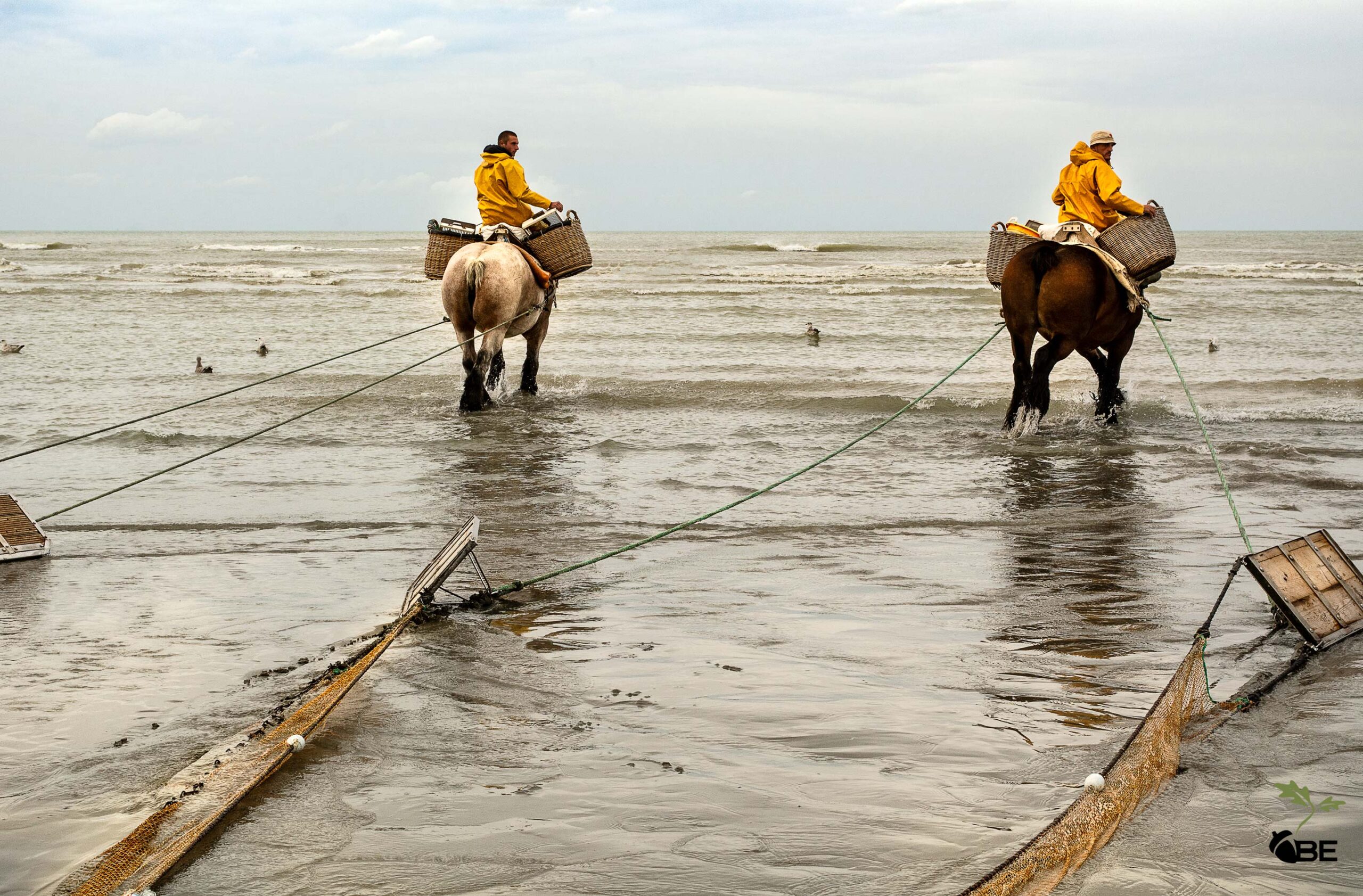 Of course, we followed them into the water. I had no shoes; therefore, I had to go out as far as I could on the sandbars before the water covered my ankles. After a few minutes of my toes sinking into the sands of the icy water, I couldn’t tell if I still had feet and had to retreat to the beach.

Within the hour, the paardenvissers commenced their return. The darker, threatening gray skies transformed into a peaceful azure blue. Seagulls of various colors swarmed around the horses, coasting on the waves and diving for the tidbit shrimp hopping into the nets. Closer they drew, and the crowd reassembled to greet the returning shrimpers. 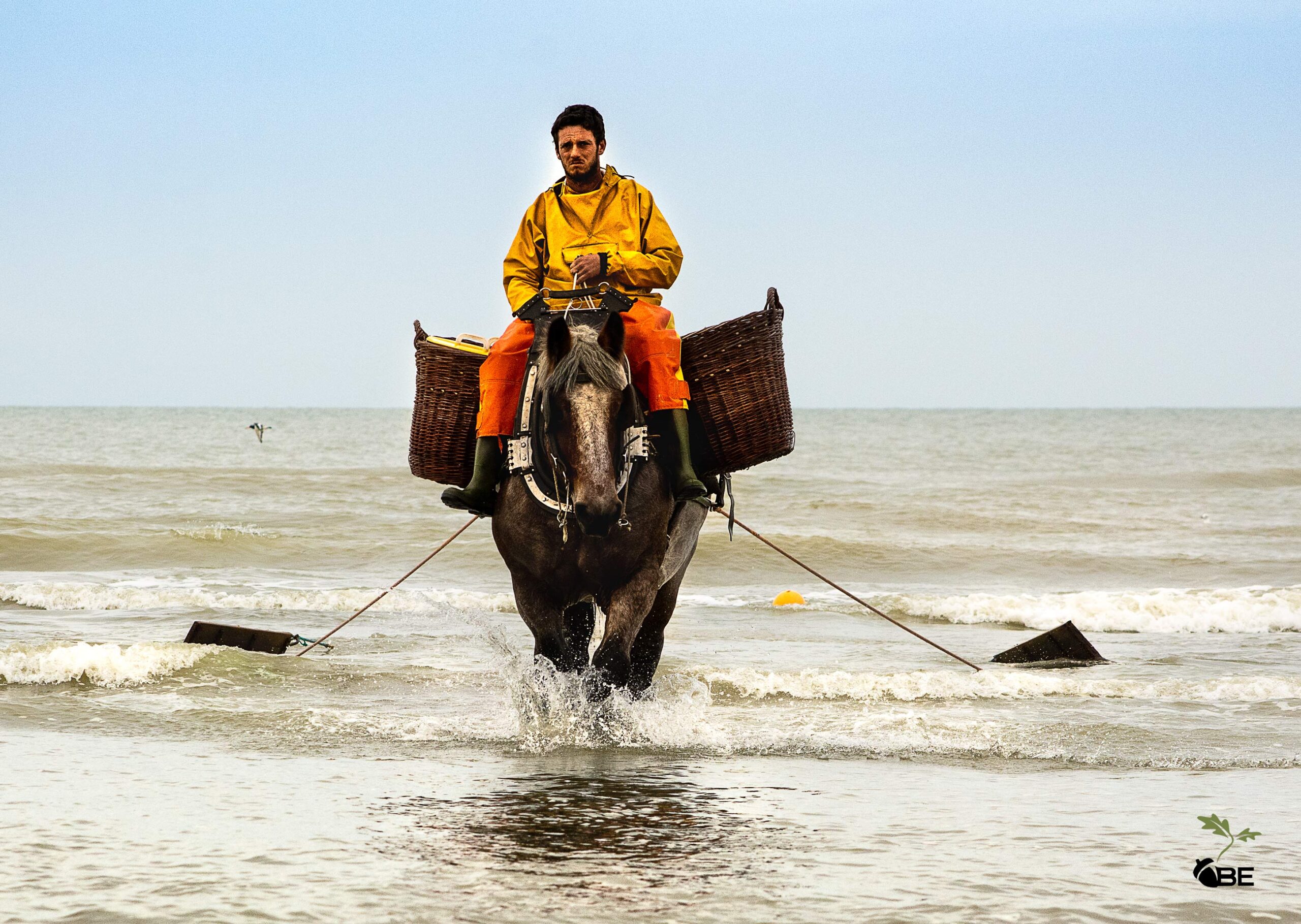 Although their catch of the hour was meager compared to other days and they would not be going back out to the depths, we delighted in watching them empty the contents of the nets into the baskets through their wooden-framed metal-mesh sieves. The small gray Crangon shrimp stayed; the crabs and other tagalong catch returned to the water as a feast for the awaiting seagulls. 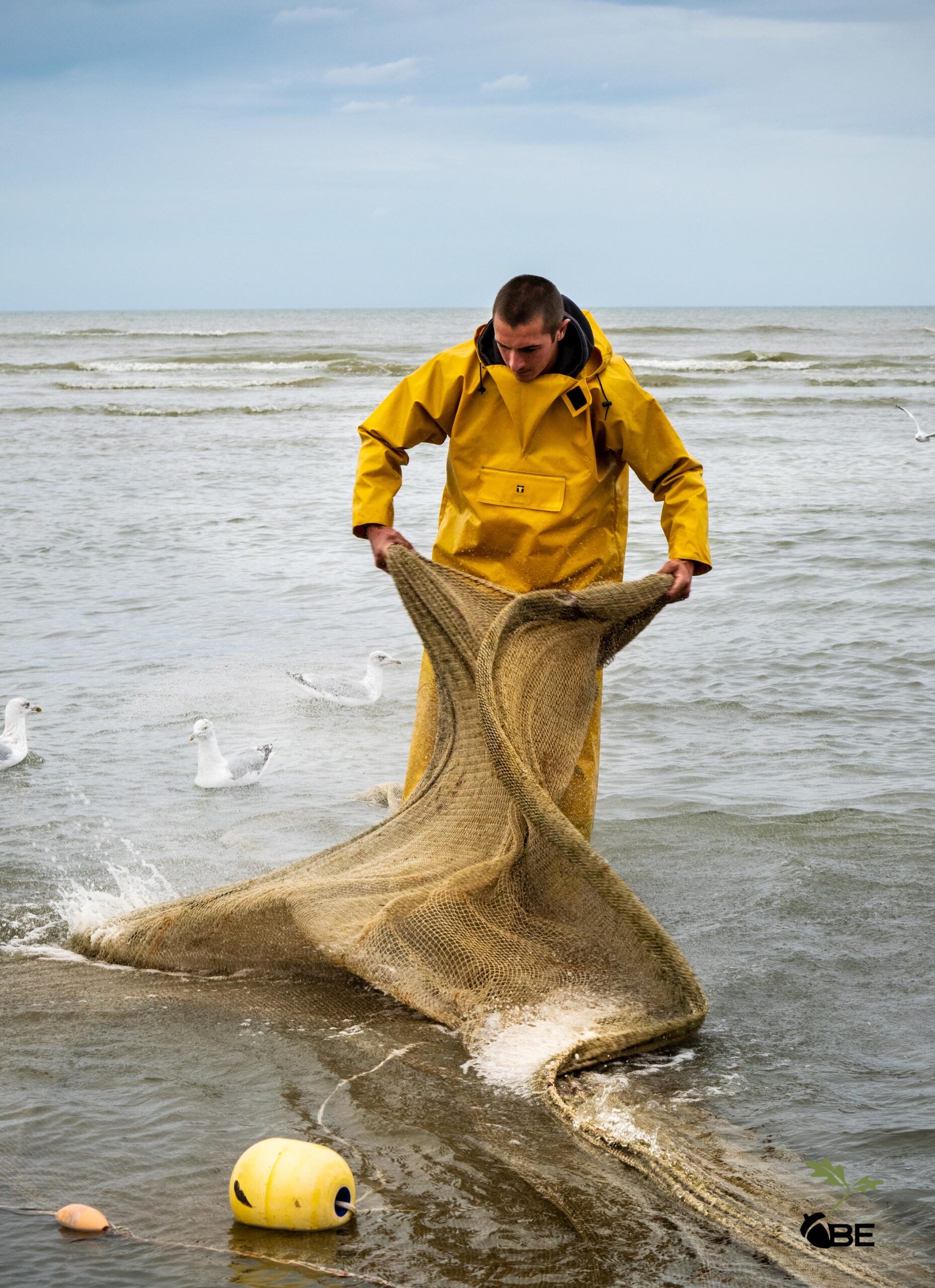 As the sun lowered slightly in the west with the onset of the September evening, the paardenvissers gathered in their nets, replaced the baskets in the carts, and gently stroked the necks of the horses with a message of satisfaction for their performances. Another day finished on the ocean with the intent to return the next day. 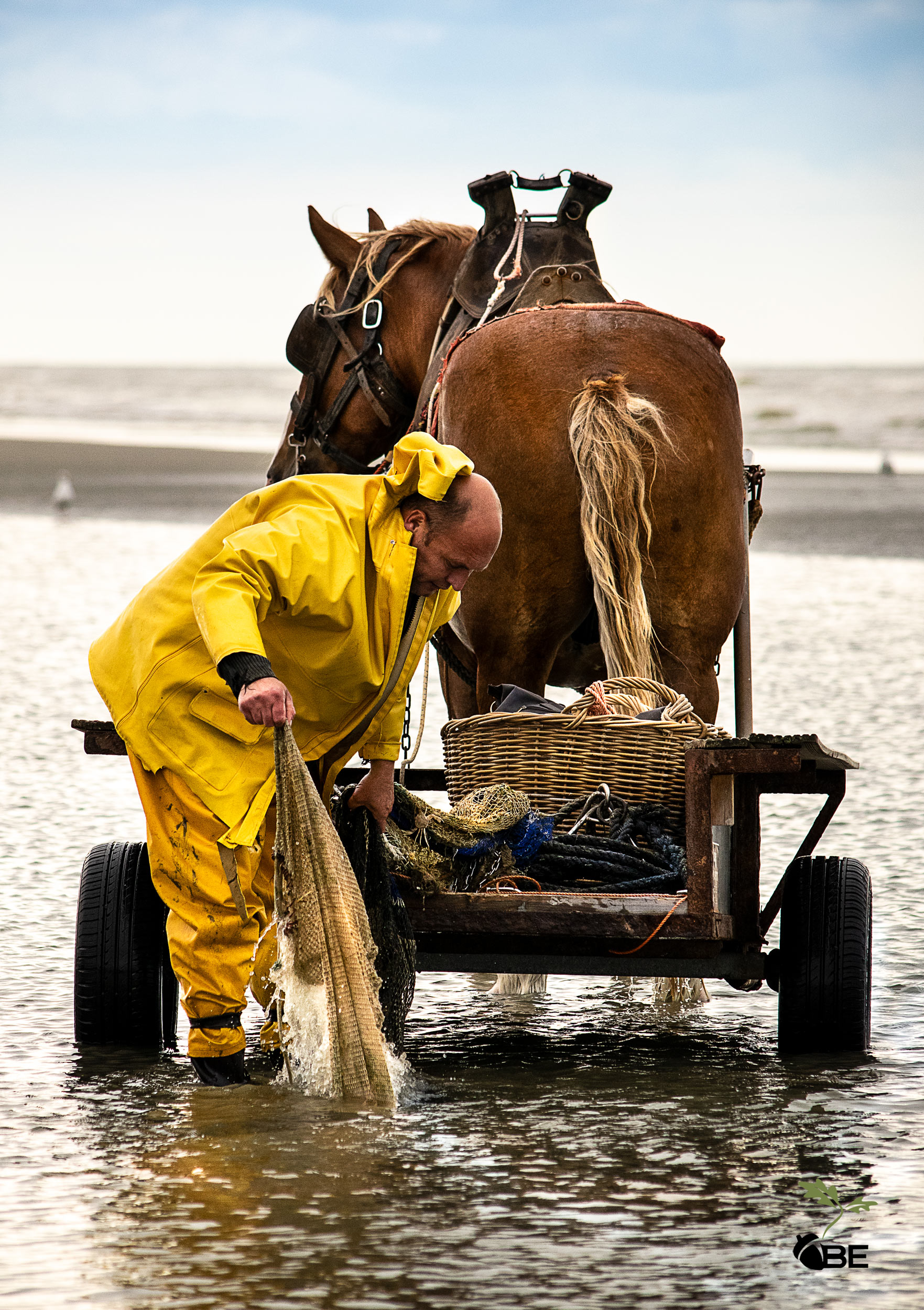 We all chased after the carts heading back toward the Astridplein, back to their homes. The crowd returned to the tram that had arrived. I paused to put on my shoes. When I glanced up, everyone had left us alone on the beach again. Other than the prints of the hoofs and carts’ wheels leaving evidence in the wet sand, the events of the previous hour seemed surreal. 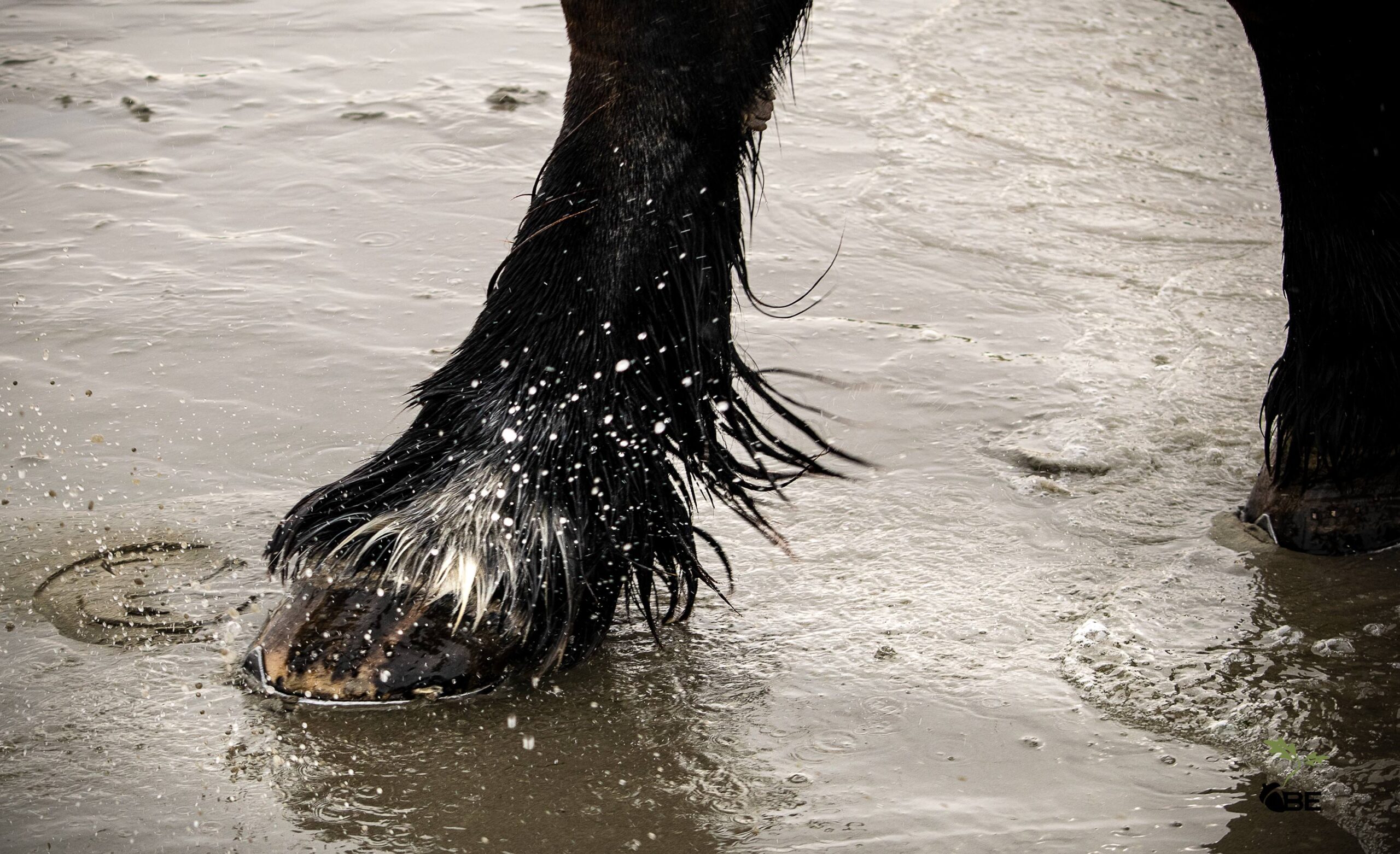 I came to see the horses…

but I departed with a greater comprehension of the Belgian horse’s purpose to Oostduinkerk, Belgium. 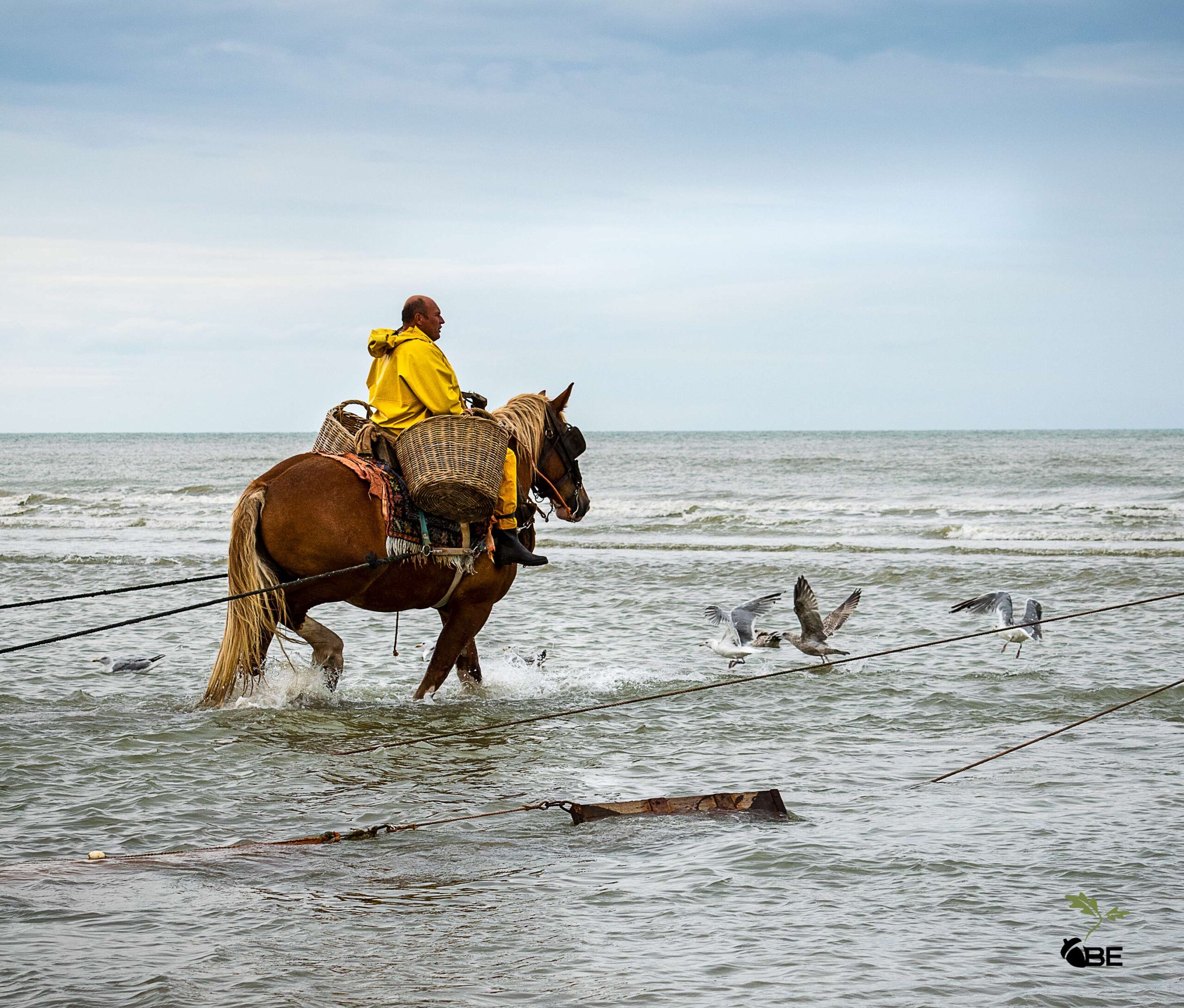 I love to explore the UNESCO preservation trails throughout the world that encourages culture-seekers like my husband and me to realize that the paardenvissers of Belgium exist and that a 500-year-old tradition could and would change my perspective yet again. Both observing and interacting with my beloved Brabant horses, laughing with the shrimpers, and following their adventure in the water offered me a greater understanding of this unique heritage than all my studying to prepare to witness it. 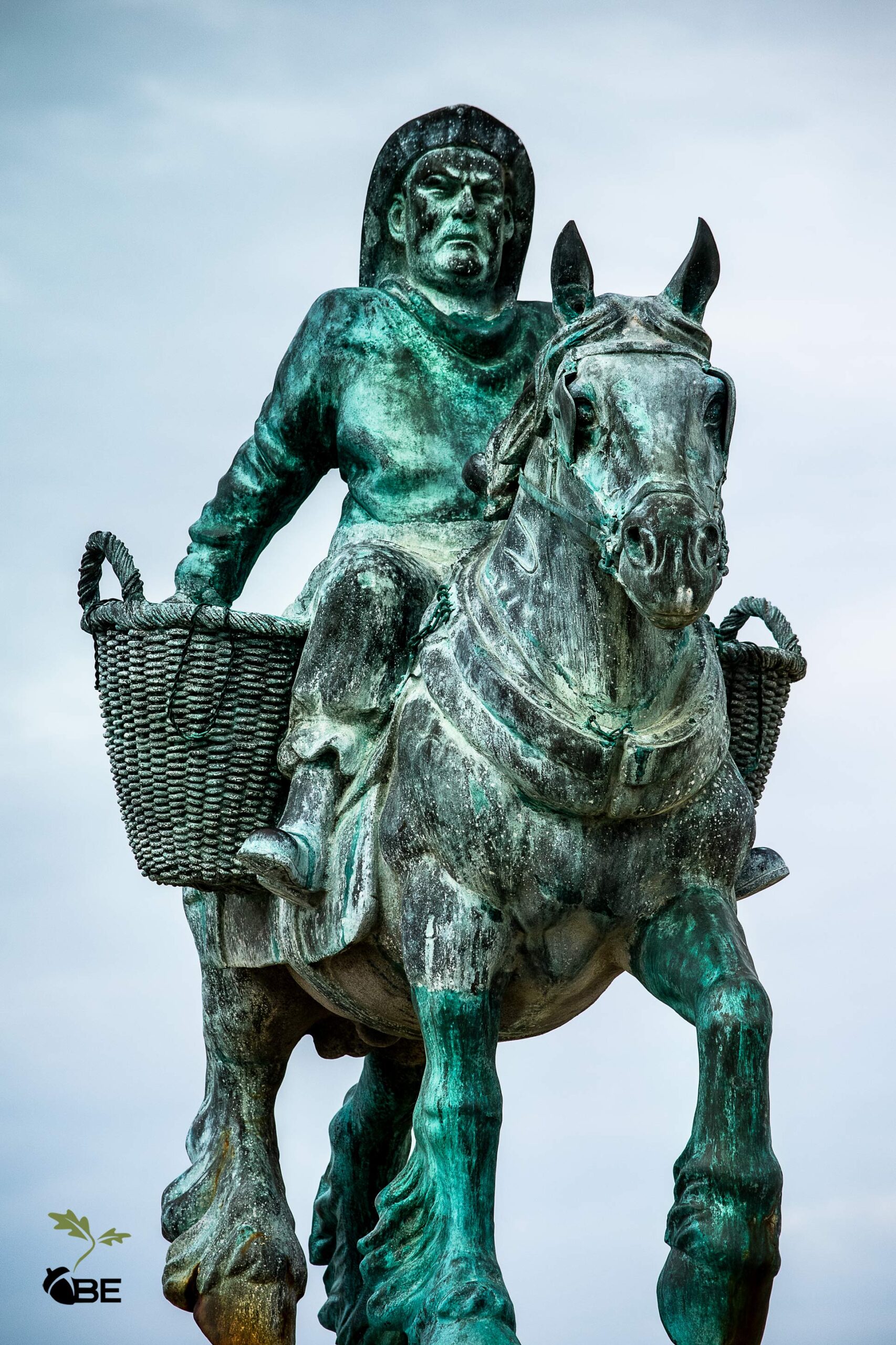 Beyond the art and finesse of catching the shrimp, the paardenvissers demonstrate their avid horsemanship. They elicit the trust of their horse to enter the cold water while dangerously maneuvering the nets through the uncertain tides to accomplish their business. They display their craft with the hand-woven baskets and hand-knotted nets to tacking up their horses with the wooden saddles and tapestry-like saddle blankets. 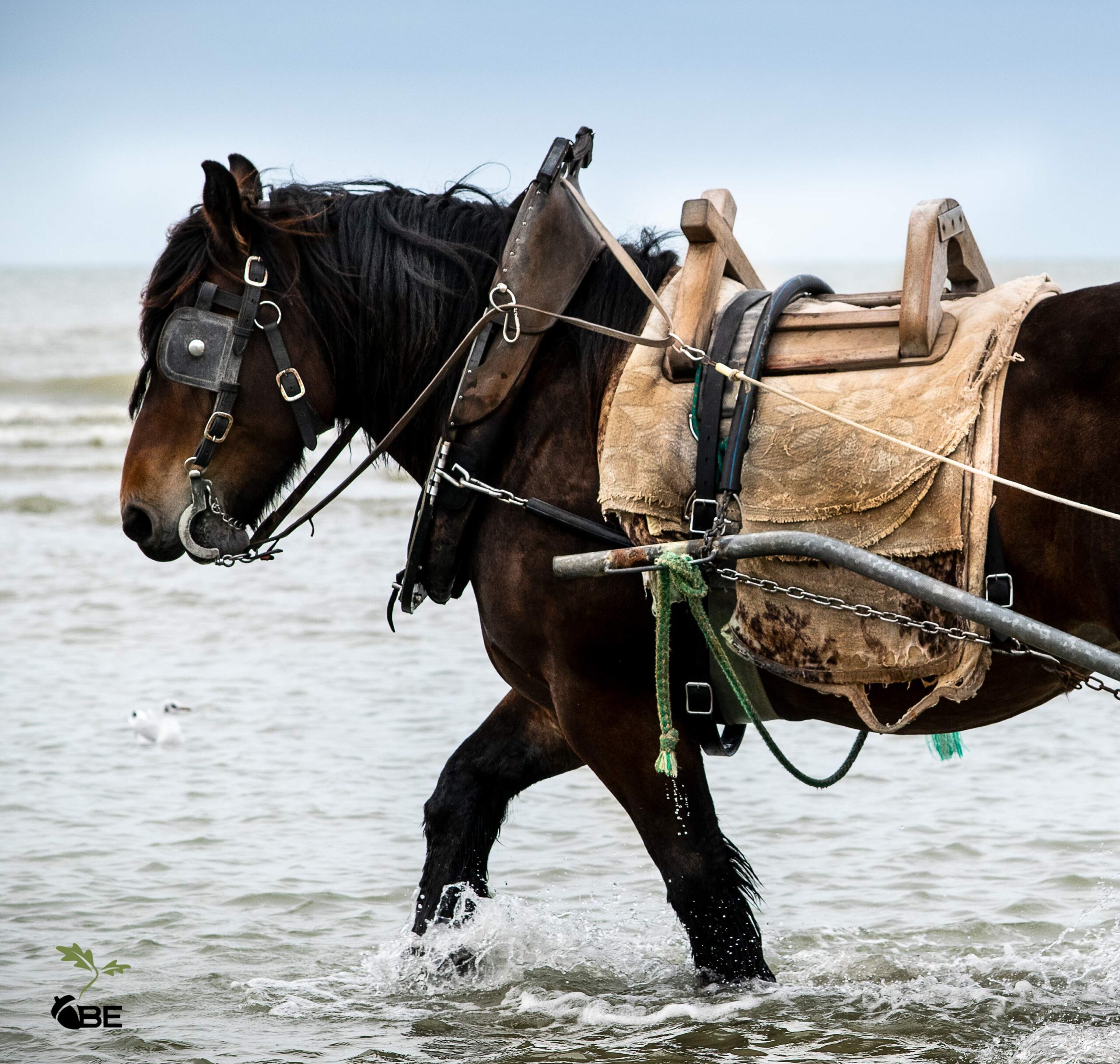 Some horses wore the horse brass medallion with honor on their foreheads. 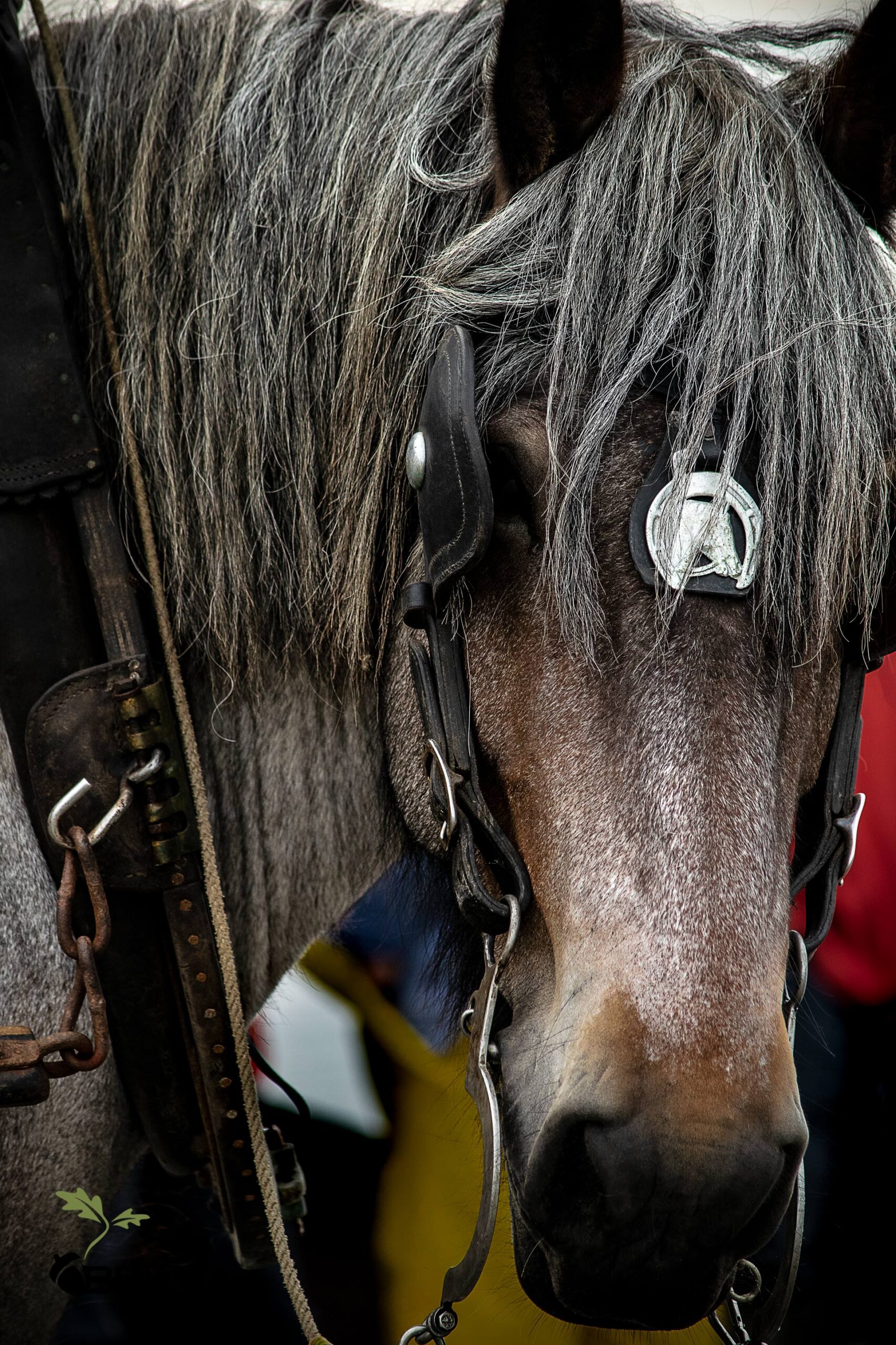 According to UNESCO, these 15 shrimp fishers are “living human treasures” who have the knowledge and skills to keep their “intangible cultural heritage of humanity” thriving for another generation to witness, learn, and protect. 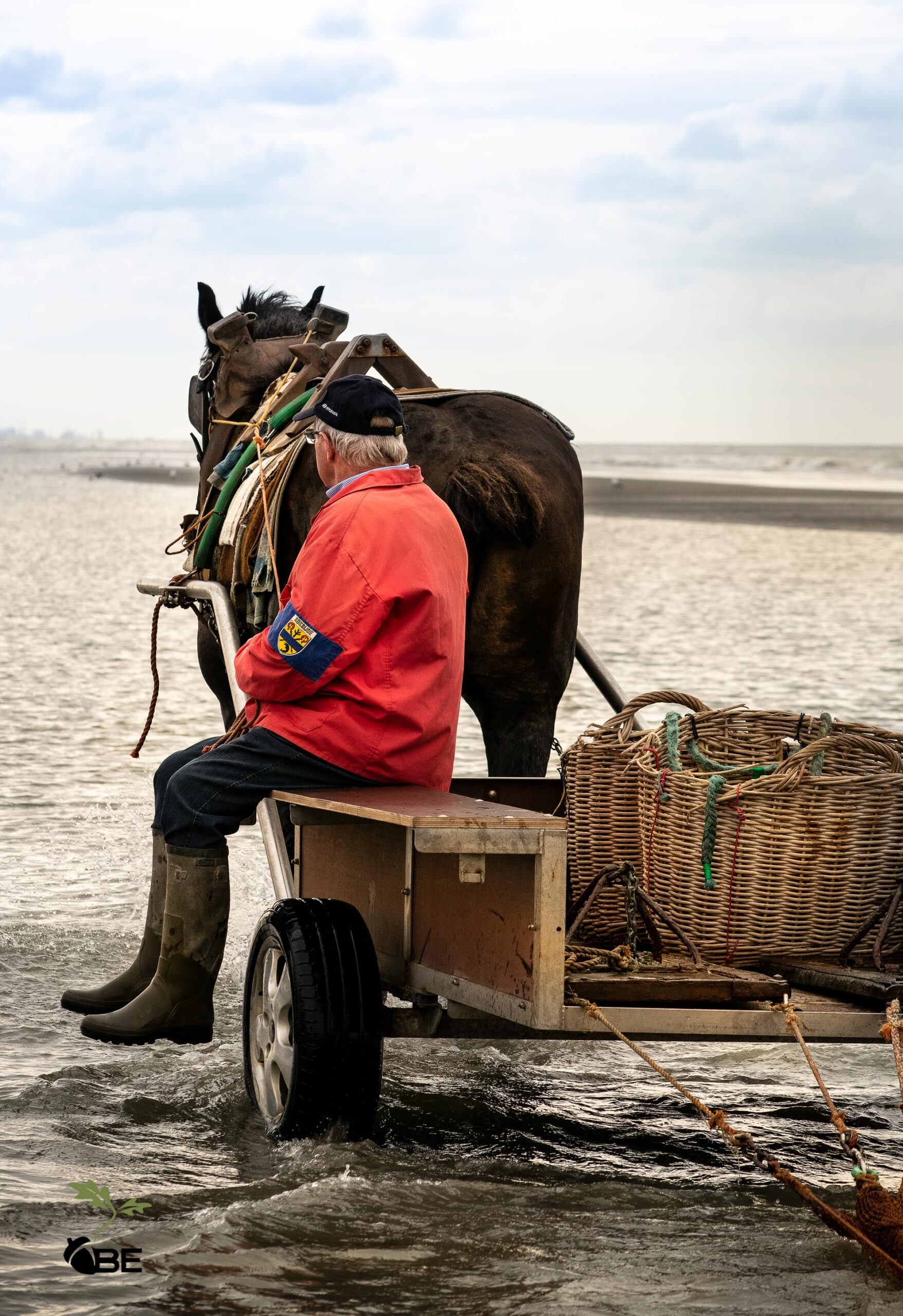