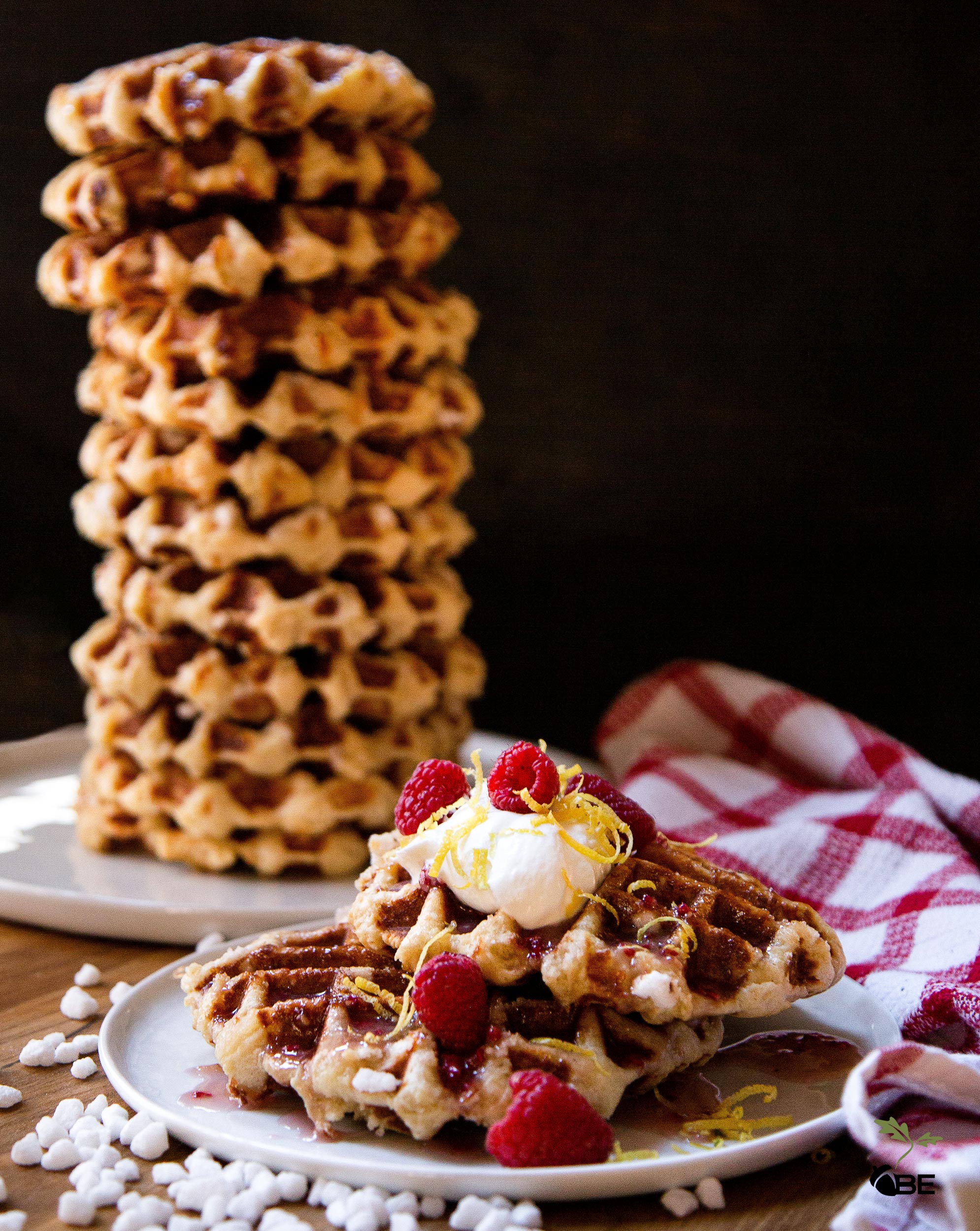 Most people recognize and have even tasted the quintessential “Belgian” waffle originating in Brussels, prepared in the deep-groove griddle to produce a thick yet light cake. However, the city of Liège in the Wallonia Region of Belgium offers an entirely unique waffle experience. The thicker, yeast Liège waffle enriched dough contains large sugar pearls. At the iron’s high heat, the combination of yeast and sugar pearls produce the evocative caramelized crunch of “les gaufres de Liège.”

For the Raspberry Buttermilk Syrup:

For the Sour Whipped Cream: 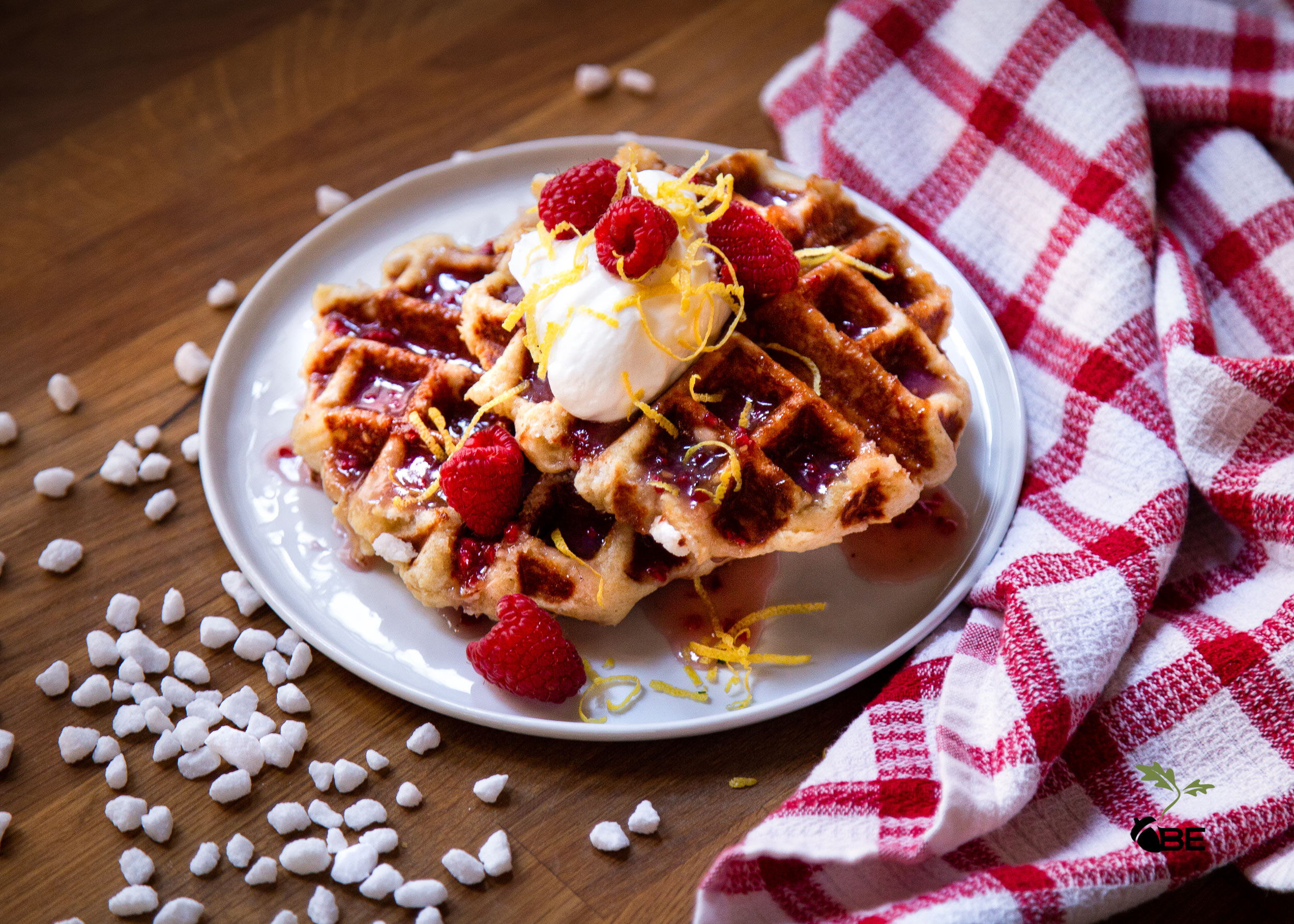 To Make the Waffles:

In a small mixing bowl, combine the vanilla sugar, active dry yeast, and warm water. Allow the mixture to proof until yeast softens, at least 5 to 10 minutes.

Heat the half-and-half cream just until warm to the touch; do not allow it to simmer. Remove from the heat and pour into a large mixing bowl. Whisk the beaten eggs into the warm milk until well incorporated. Gently stir in the yeast mixture. Set aside.

Into a separate mixing bowl or onto a sheet of baking parchment, sift together the flour, potato flakes, salt, and cinnamon. Gently fold the dry ingredients and the melted butter into the wet mixture until the moisture envelopes the dry ingredients, forming a soft dough. Fold in the pearl sugar. Cover and allow to rise about 1 hour.

Split the dough into 6-ounce portions (about ¾ cup). Pat them down slightly to form thick discs, set them on parchment paper, and allow the portions to rise again for about 20 minutes.

While the portions rise, heat a deep-groove waffle iron (Belgian waffle iron). Press each dough portion onto the base of the iron. Cook until the pearl sugar melts and the exterior appears golden and crispy while the inside remains soft. Serve warm or cold, coated with raspberry buttermilk syrup, and topped with a dollop of sour whipped cream. Yields about 14 waffles.

To Prepare the Raspberry Buttermilk Syrup:

In a saucepan set over medium heat, combine the butter, sugar, buttermilk, and ½ cup fresh raspberries. Stir the mixture over medium heat until all the ingredients melt and thicken. Vigorously stir in the baking soda and remove it from the heat. Add the vanilla extract and raspberry flavoring. Fold in the remaining raspberries. Allow the syrup to sit for the flavors to meld.

To Make the Sour Whipped Cream:

In the bowl of a stand mixer fitted with a whisk attachment or in a medium mixing bowl and using a hand mixer, beat the heavy whipping cream while slowly adding in the powdered sugar. Continue to mix until the cream reaches stiff peaks. By hand, gently fold in the sour cream.

For the Love of Waffles 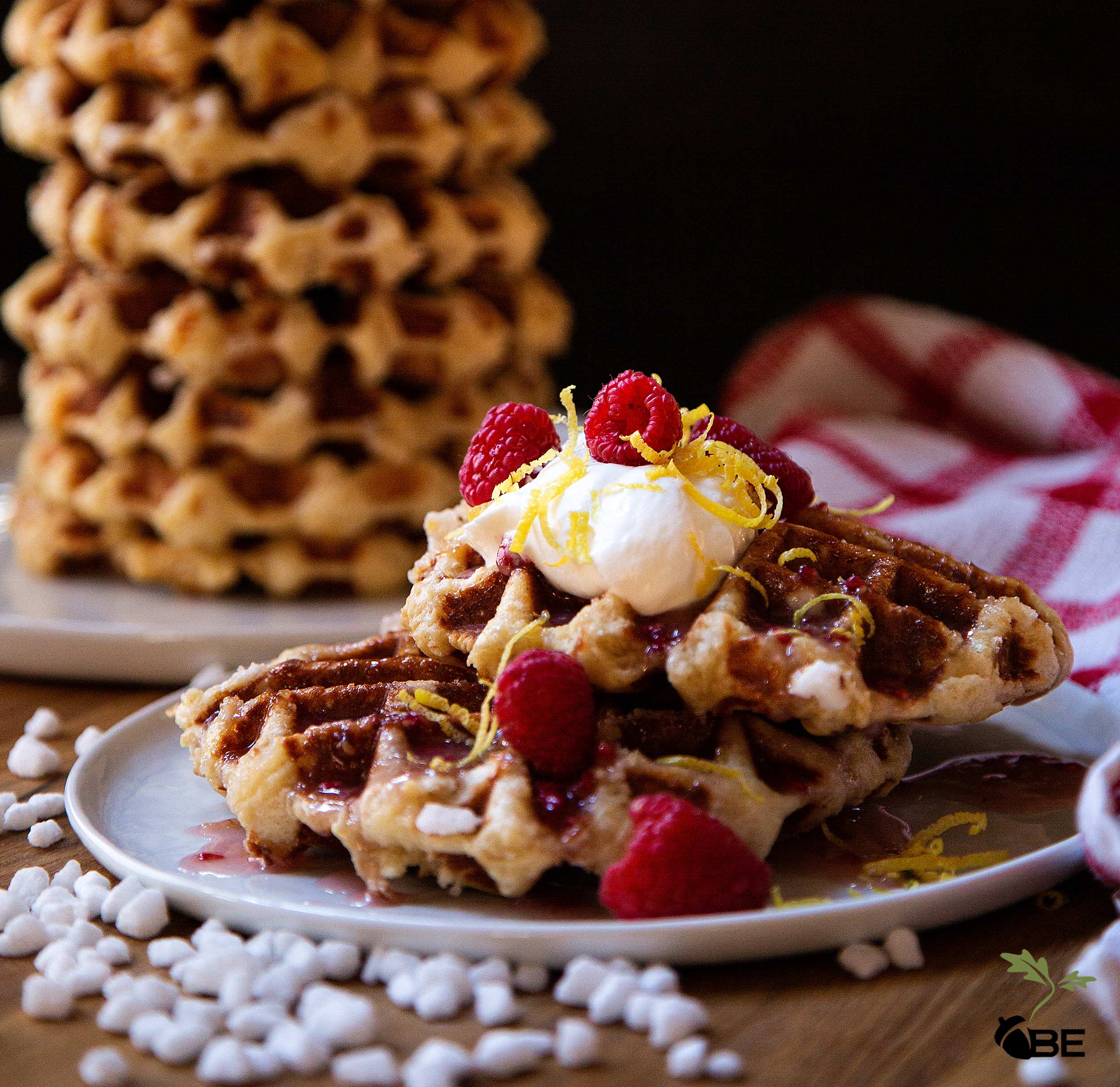 Ancient Greeks prepared a more savory flatbread cooked between two irons called obelios. Throughout the early Medieval period, the tradition of cooking oublies, or wafer cakes (usually for Communion wafers) between decorated forged irons, called moule à oublies, that left an imprint, especially of Christian emblems and stories, on the surface became vastly popular. The various Crusades brought the exotic flavors of rose and orange and introduced honey and spices to flavor the oublies.

Notable guilds formed to prepare the oublies, and the tradition spread quickly throughout Europe. By the late Middle Ages, France and Belgium had created decorative irons with deeper grooves. By the end of the High Rennaissance, leavening with eggs and yeast as well as sweetening with honey or sugar became a part of every fine recipe. Germany introduced spices like cardamom and mace into its zuickerwaffeln, copied by many other countries. By the Romantic period, a Parisian chef introduced the gros sucre, or large (pearl) sugar, which Liège, Belgium, would adopt into its famous waffles.

Waffles became less of a food for the aristocrats and more for everyone as international trade made sugar and chocolate available to everyone. Even the oublieurs (waffle-guild craftsmen) gave way to street and fair vendors. In 1962 at the Seattle World’s Fair, the Belgian waffle premiered in the United States. Combined with the American version of the griddle waffle, the American Belgian waffle emerged. Today, Belgium offers over 12 varieties of waffles as visitors travel its regions.